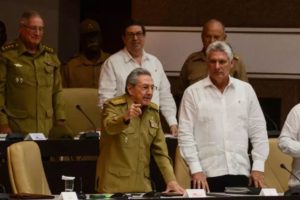 For over ten years the Marxist “Gerontocracia” led by General Raúl Castro (86) and Machado Ventura (87) has been carefully engaged in selecting the new generation of leaders to integrate a younger inner circle of power.

On April 19, 2018, Miguel Díaz-Canel was designated President of the Council of State and Ministers by Cuba’s “Poder Popular,” an obedient decorative parliament.  Díaz-Canel appointment fits in the dynastic succession process, gradually implemented to empower the sons, daughters and close allies of the power elite in prominent positions. An allucinating display of madness for the unburied corpse of Marxist-Leninism.

However, in a frenzy of misleading headlines some news outlets reported that Raúl Castro was “transferring the torch of power to the Díaz-Canel administration,” when in fact Castro remains as First Secretary of the Communist Party (until 2021), the “highest leading force of the society and the State.” (Chapter 1, Article 5 of the current Constitution)

Raúl Castro’s absolute control is above everything and everyone, including Miguel Díaz-Canel. As President, Díaz-Canel does not have the constitutional authority to name “his administration” cabinet.  In the Council of State each member has one vote, including Díaz-Canel, and the decisions are reached by a simple majority. (Chapter X, Article 91 of the current Constitution).  The Cuban-Marxist-Leninist system remains totalitarian with the military and the Communist Party leading the succession process. In 60 years little has changed.  Capitalism, private property, individual freedom, and market economy remain prohibited in Communist Cuba.  (A car and a house are the exceptions)

The insistence on the unreality of Cuba’s obsolete dogma is based on the rulers’ need to pretend that things exist when in fact they do not.  The Cuban Parliament is a sham; the economy is a disaster and elections are an embarrassing farce.  The Cubans exist in a permanent toxic environment of lies.  Cuba is a country of unmitigated, incoherent deceptions.  Lying is so pervasive and massive that the people no longer even realize the total falsification of the truth.  This ethical malady deforms the people’s character and is the root cause of the prevailing widespread corruption of the Marxist society and institutions.

The military controls most of the economy, through the “Grupo de Administración Empresarial” (GAESA), including several highly lucrative illegal operations. (Mostly from Venezuela’s military drug cartel) The president of GAESA is General Luis Alberto Rodríguez Callejas, Raúl Castro’s son in law.
The revolution is an economic and moral failure.  The communist system is rotten to the core by corruption, inefficiency and greed.  In 2018, Cuba is facing severe economic prospects, and the health of Raúl Castro is a major issue of concern.

• The devastating destruction of hurricane Irma on the essential national infrastructure.
• The Venezuelan debacle has cut over 65 percent of the oil export to Cuba and drastically reduced the multi-million dollars income from the medical service (the health subsidy)
• Over 75 percent of the food has to be bought from foreign sources.
• Decrease in the production and price of nickel.
• Near collapse of the sugar industry.  The result is the lowest yield in more than a century at 1.1 million tons of raw sugar.
• Decline of foreign investors, the negative impact of a double currency and the dysfunctional relationship between salaries and productivity.
•  Failure of the Mariel Special Economic Zone.  From the original 400 investment projects in Mariel, only 35 remain active and 10 are actually operational.

Díaz-Canel hard line discourses are a poor imitation of Fidel Castro’s, the supreme showman.  It is evident that Díaz-Canel lacks charisma and puts up a poor performance, but the show must go on.  The Cuban Communist Revolution is an unburied corpse, a tragic legacy of an immense moral and economic catastrophe.

by Leon Hirzel, J.D. Chief Justice John Marshall was devoted to upholding the supreme power of the U.S. Constitution as ...