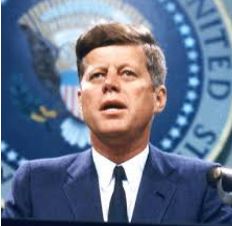 President Johnson was deeply concerned with information regarding alarming and threatening remarks made by Fidel Castro against JFK; and the mounting evidence of Cuba’s Minint officers’connection in the assassination. The profound dislike between Castro and the Kennedys was mutual. On September 8, 1963, ten weeks before Lee Harvey Oswald murdered President Kennedy in Dallas, Fidel Castro spoke at a reception in the Brazilian Embassy in Havana. He raised his voice and said: “The United States’ leaders must realize that if they assist in the terrorist plans to eliminate Cuban leaders, they themselves will be in danger.”  [Haynes Johnson, “The Bay of Pigs” New York: Norton Company, 1964] p. 354

Seven days after JFK was murdered, President Johnson decided to create a commission to investigate the assassination headed by a prominent jurist that was trusted by the American people. The choice was Earl Warren, the 14th Chief Justice of the United States Supreme Court who had been appointed to the Supreme Court by President Dwight Eisenhower in1953.

At first, Warren turned down the offer but President Johnson insisted and invited him to meet personally at the White House. The President expressed his fear that evidence of Cuba’s involvement in the assassination could lead to a nuclear war with the Soviet Union. (Robert Jackson and Ronald Ostrow, “Los Angeles Times” September 23, 1993). That could become a major human catastrophe. Warren was emotionally impacted and finally the Chief Justice accepted to lead the investigation that became known as the Warren Commission. President Johnson felt in control. From November 29, 1963 to September 24 1964, the commission investigated the JFK murder.

The Commission held hearings and took testimonies of 552 witnesses.The seven days of Oswald’s presence in Mexico and his close relationship with Cuba’s MININT and KGB Agents were superficially mentioned. The fear of a nuclear war was an overwhelming incentive for the incongruent report. Warren committed the sin of factual omissions. This investigation’s failure facilitated the KGB and Cuba’s excellent operational expertise to manipulate disinformation data for the myriad of conspiracy theories.

KGB Division General Nikolai Leonov, a friend of general Raul Castro  and  “Che“ Guevara, headed the KGB in Mexico. He wrote in his memoirs “Hard Times” that  he met Oswald in the Soviet Embassy. He was seeking  a visa to Russia via Cuba. Oswald was received in the reception room where, according to Leonov, there was a fully loaded revolver  on top of a table. A rough approach to an individual seeking a visa. Oswald was informed that the visa would take several months. He was upset but left quietly. (Nikolai Leonov “Hard Times” p 94-95).

Oswald also met with Valery V. Kostikov, a 30 years old KGB officer, assigned in September 19,1961 to the Soviet Embassy in Mexico City. He has been in Cuba from January 6 to March 7,1961.The CIA believed that Kostikov was an expert in “wet operations” or target assassination. ( John Barron,” KGB Today. The Hidden Hand”,New York:Reader Digest Press, 1983, p 307).

In an excelent analysis of JFK assassination, the Harvard trained clinical psychologist Jose Ignacio Lazaga, a highly regarded head of Havana’s Villanueva University Department of Psychology stated a comprehensive perspective of  Oswald’s criminal motive.  Lazaga believed that Fidel Castro’s war at minimum, the “Intellectual author” of the crime, who “knowing that Oswald had conceived the idea of killing the President, gave his plan the necessary push that would make it a reality, by approving the idea and offering to protect him after the crime had been perpetrated.” [Russo and Molton op cit p. 385] this accurate perspective provided the essential need to have Minint officer Fabian Escalante in Dallas, to provide Oswald with the psychological support for his criminal action and a possible way out to a safe sanctuary in a heroic role.

The death of his dear brother JFK was for Robert a lacerating grief that remained forever present in his short life. (He was shot and killed on June 5, 1968 by a Palestinian fanatic. He was 42 years old).

For Robert Kennedy, the murder of his brother John had a clear and convincing evidence of Castro’s agents connection with Lee Harvey Oswald. This was the ultimate shame and a degrading humiliation. Kennedy’s irresistible impulse to avenge the Bay of Pigs disaster by eliminating Cuba’s dictator turned around with a vengeance.

At this stage of his life it was obvious that JFK was destitute of the tenacity, analytical concentration and strategic vision needed in a courageous leadership. From the fatal shot in Dallas, death and sorrow became the companion of Robert. He suffered immensely and felt the urgency to cover up their obsessive drive to kill Fidel Castro. The historical accomplishment of his dear brother had to be a shining legacy of Human Rights, Individual Freedoms and the Rule of law in the majestic perception of an idealized Camelot. A most difficult task.

The cover up of a huge clandestine operation.

Committed to getting rid of Fidel Castro, JFK placed his brother Robert, the Attorney General, in charge of the clandestine operation, led by Manuel Artime, a charismatic Cuban exile leader and Bay of Pigs veteran.

In January 1963, Robert Kennedy met with Artime at his Hickory Hill Estate in Virginia to implement the clandestine operations against the communist regime. Priority one was the execution of Fidel Castro.  Over two thousand young Cubans fought from bases in Santo Domingo, Costa Rica and the Florida Keys with extraordinary courage and patriotism. [ Graystone Lynch, decision for disaster “Potomacbook 2000, p.480]

By 1961, Rolando Cubela, the emotionally unstable leader of the Directorio Revolucionario, (DR) and later a guerrilla fighter in the Escambray Mountains, where he fought side by side with “Che” Guevara portrayed himself as betrayed by Castro’s communist revolution. On August 2, 1962 Cubela established a link with the CIA. It was through his friend Carlos Tepedino, an active CIA operator.

At this time Cubela was perceived as the most valuable asset of the agency to get rid of Castro. On September 5, 1963, the CIA officer Nestor Sanchez met with Cubelas in Porto Alegre, Brazil, and at the end of the meeting, Cubela requested another meeting with a high-level official of Kennedy’s administration. (Brian Lattel, “Castro’s secrets” eBook, McMillen corporate, 2012 p. 473) Cubela’s cryptonym at CIA was AM/Lash. [bid p. 451]

Fully engaged in the clandestine operation, Robert Kennedy ordered Desmond FitzGerald, Chief of the Cuban Task Force and in charge of AM/Lash to arrange a meeting with Cubela in Paris. This was a controversial meeting. Some high-ranking CIA officials did not trust Cubela as an enemy of Fidel Castro. Was Cubela a double Agent?

It was an overcast day in Paris. On October 22, 1963, Cubela met with Des FitzGerald and was presented with the famous “poison pen” device provided by the CIA’s Technical Service Division. The instrument was a Paper Mate ballpoint pen with a fine syringe that could deliver the poison to Castro. Cubela rejected the syringe plan.

A month later, on  the fateful day of November 22, 1963, Cubela and Tepedino met in Paris with CIA officer Nestor Sanchez, a ten year veteran of the agency. Sanchez informed Cubela that the CIA was ready to provide his requested rifle with a telescope and a silencer. Cubela had a house in Varadero Beach  near  one of Fidel’s houses, which was the perfect place for the killing shot.

It is at this moment that the hand of destiny took over. During the Cubela’s meeting in Paris the telephone rang, it was an emergency, Sanchez listened to the brief message from Washington. He seemed to be bewildered, caught in a long peinfull moment. Then he mentioned the terrible message.. ” President Kennedy  had just been shot! [Russo and Molton, op cit p 13] The men were in shock, stood up in silence , put on their coats and left.

The second cover up was on. Suddenly the top executives of Kennedy’s administration suffered a loss of memory. On the multiple investigations of the JFK crime, they could not remember the several details of the huge clandestine activities led by Robert Kennedy. It was an active CIA operation up to the day of the President’s crime and the meeting with Cubela that took place that same day in Paris.

In 2005, Oscar Marino, an intelligence Cuban defector, detailed what he knew of Oswald’s visit to the Cuban diplomatic mission in Mexico City. Marino stated that “Oswald volunteered to kill Kennedy and that Cuban diplomats in Mexico City had advanced knowledge of Oswald’s assassination plan.” “He adopted our plans as his own- his idea was a natural project of our wish. He was an instrument of the G2 (Cuban Intelligence). It makes no difference whether he volunteered or was used. It all ended up the same.”(Russo and Molton,op cit p 405)

As soon as John F. Kennedy was murdered, Fidel Castro began a disinformation campaign, implicating the Mafia who owned gambling casinos in pre-Castro Cuba, the teamster Union (Hoffa), and Cuban exiles. Castro claimed that he knew nothing of Oswald’s existence before the Dallas assassination and that he was never informed on Oswald’s threatening remarks against Kennedy in the Cuban Consulate in Mexico City. These outrageous lies were part of a premeditated deniability perfidy.

In an extraordinary revelation, former President Lyndon Johnson, with access to top secret information, stated what he knew from the beginning of the investigation and his cover up order that Castro was involved in John F. Kennedy’s assassination. In a TV interview with Howard K. Smith, President Johnson stated: “Well, Kennedy tried to get Fidel Castro, but Fidel Castro got Kennedy first. (Georgiie Ann Geyer,”Guerrilla Prince,” Little Brown and Company,Boston,1991. p299)

This series of articles about the invasion of the Bay of Pigs, the missile crisis and the murder of JFK are part of a future work that will be published as a book about those decisive years for the history of the United States, Cuba and the world.