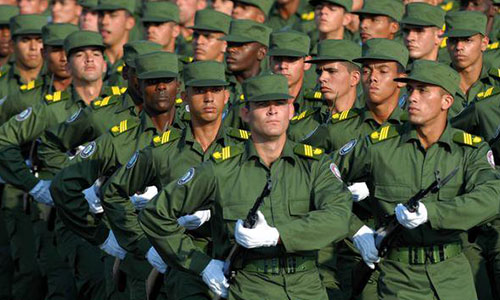 Aware of the fragility of dynastic succession, General Raul Castro is placing his trusted generals in full control of the three Strategic Regions of the Cuban Armed Forces. This is an exercise to facilitate succession through a Military Junta.

Hurricane Irma severely damaged the electrical, water, housing, transportation, agricultural and tourism infrastructures. To deal with the massive devastation, General Raul Castro, acting as the supreme commander of the National Defense Council, strengthened the Armed Forces authority in Cuba by naming three generals to manage the Strategic Regions with overriding power over the governing agencies of the State.

In control of these Strategic Regions are General Leopoldo Cintra Frias (Western Region), General Joaquin Quintas Sola (Central Region) and General Ramon Espinosa Martin (Eastern Region). These generals are highly trusted in the Castro family’s inner circle of power. The generals in charge of the three armies, Eastern, Central and Western, remain in their existing position but are now subordinate to the new structure.

The Strategic Regions Authority is specifically framed in Cuba’s communist constitution (Article 101- Law No.75) for exceptional national emergencies. It provides total control over the Armed Forces, Communist Party departments and all government bureaucracies including food and water distribution, as well as judicial and economic activities. These three generals are in fact proconsuls of their strategic regions under the supreme command of General Raul Castro.

Army Corps General Ramon Espinosa, in command of the Eastern Strategic Region, during an inspection in Esmeralda, Camaguey.

This natural disaster has created a crisis of multiple complexities. After hurricane Irma, the generals are at the mercy of uncontrollable events. It is evident that a catastrophe of such magnitude has placed the communist regime in a fragile predicament.

Hurricane Irma’s devastation has brought Cuba’s infrastructure to its breaking point and some crucial public services to the verge of collapse. The hurricane’s fury has crippled the island’s substandard economy and General Raul Castro’s financial ability to pay for reconstruction.

With the economy in shambles and Venezuela’s subsidy in a deep decline, Cuba has few substantial sources of revenue. One source are remittances, mostly from Cubans in Miami with relatives in the island. The other is drug trafficking- an old trade Cuba’s regime has significant experience in.

In 1991, immediately after the disintegration of the Soviet Union and its massive subsidy to the island, Fidel Castro activated a powerful Cuban presence in the billion dollar cocaine market in the U.S. and Europe. Presently, Raul Castro’s veteran, elite force is back in the drug business with Colombian and Venezuelan drug cartels.

It is evident that the rebuilding process will be long and difficult. A declining economy, low productivity and corruption will not produce the required wealth for the task of repairing the collapsing infrastructure.

This is a major concern of the military elite since greater public dissatisfaction after a long period of misery and poverty could evolve into demands for solutions and even a possible rebellion. Public dissatisfaction and hopelessness could quickly develop into open opposition against the Communist regime.