The Founding Fathers phrase created by Warren Harding, the 29th President of the United States marked the names of the remarkable generation of patriots recognized by history. These individuals were the symbols of the heroic War of Independence and the visionary architects of the 1789 American Constitution that framed the governing structure of the Federal Union. Primary among them are George Washington, the Commander-in-Chief of The Continental Army and the First President of the United States of America: Thomas Jefferson, John Adams and Benjamin Franklin that led the drafting of the Declaration of Independence proclaimed on the 4th of July 1776; Alexander Hamilton, James Madison and John Jay that wrote most of the Federalist Papers and the final U.S. Federal Constitution approved in September 1789. 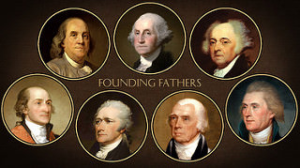 After the Declaration of Independence, American leadership enacted the Articles of Confederation, which was our first Constitution, providing a fragile central government of thirteen sovereign states.  It was ratified in 1781 and provided legitimacy for the Continental Congress to direct the Revolutionary War against England.  At the Annapolis Convention in 1786, the delegates of the 13 self-government states endorsed a motion calling to meet at a Constitutional Convention to draft a New Constitution.  There was real danger of fragmentation of the North American Continent into several sovereign and independent nations. There was a great deal of concern.  The North and the South were drifting apart.  Unity was the dominant issue, but the task of bringing together the conflicting political visions and the diverse economic needs of the various regions of America was a monumental enterprise.

If there was ever a leadership whose intellectual knowledge and experience prepared them for this difficult journey to build a federal republic with a powerful central government, it was the founding fathers.  The great French historian and social scientist Alexis de Tocqueville believed that the revolutionary leadership had gained a great deal of political insight as elected officials in their colonial meetings and later in the powerful state assemblies.  An essential practical experience sorely missing in the Spanish American colonies.

The Constitutional Convention of 1787’s goal was to unite the 13 sovereign states, creating a modern, strong, and efficient central federal government. By combining the people’s practical ingenuity, enormous natural resources, and capital investment in private properties they were able to supply the growing continental commercial market.  Another essential component was continuity of the rule of law in the English jurisprudence tradition.  They knew the perils of navigating in unchartered waters, but they accomplished the monumental task of unity by drafting a constitution. For 232 years has served the nation to confront and resolve multiple crisis and injustices which includes a bloody civil war that literally crushed the cruel and degrading system of slavery, forging a society that is today a sanctuary of human rights, private property, and individual freedoms. 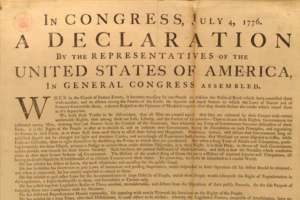 English Prime Minister, William Gladstone called the American Constitution: “the most remarkable work known to me, to have been produced by the human intellect”. For Thomas Jefferson, the third president of the United States, the respect and alliance to the constitution is the fundamental guarantee for “life, liberty and the pursuit of happiness”, as the supreme arbiter of the Rule of Law.  In 1791 the founding fathers added the Bill of Rights to the constitution.

The American War of Independence and the birth of the United States had a powerful impact on Cuba’s economic development.  When the American English colonies closed their commercial ties with the English Sugar Islands in the Caribbean, Cuba quickly filled the sugar supply needs of the American market, and the United States became Cuba’s best commercial partner.  The sugar import to the U.S. from Cuba began growing at a massive rate. By 1877, the United States was buying 82% of Cuba’s total sugar production.  Unfortunately, in 1960, the Cuban communist revolution confiscated private properties in Cuba, embracing a decaying system that included a decrepit commercial partnership with the Soviet Union.  63 years later, Cuba’s national service infrastructure has collapsed, and the Cuban youth is demanding “cambio y libertad”.

During the First World War, on December 24 and 25, 1914, an unusual and spontaneous event occurred between German and British ...