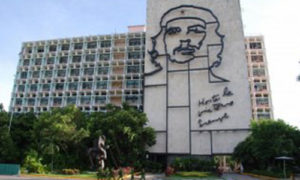 The MININT Commitment To Communism

On December 1, 1961, barely seven months after the defeat of the Bay of Pigs invasion, Castro announced to the world that he was leading a Communist revolution: “I am a Marxist-Leninist and shall remain a Marxist-Leninist until the day I die.” Following this announcement Castro began to build a totalitarian state.

Lenin’s idea of fear was the guiding goal of Castro’s new state. The essential premise was to unleash a brutal reign of terror to obliterate the bourgeoise class and secure absolute power. But to destroy the heroic resistance to communism a ruthless violent force was required. The Minister of the Interior (MININT) became the enforcer of both, fear and terror.

The G-2, ancestor of today’s MININT, was for the emerging Communist tyrant, the shield and the sword of his Marxist revolution. The Ministry of the Interior (MININT) was founded on June 6, 1961as part of the Cuban Armed Forces. It was headed by “Comandante” Ramiro Valdez (1961-1968), a ruthless comrade of Castro from the guerrilla campaign.

To enforce his Marxist rule, Castro quickly concluded that all opposition, whatever its political affiliation, had to be classified as counter-revolutionary. The MININT led the brutal repression by applying violence, arrests, beatings, torture and executions.

Castro was following Lenin’s dictum (March 1922): “The greater the number of representatives of the reactionary clergy and reactionary bourgeoisie we succeed in executing…. The better. We must teach these people a lesson right now, so that they will not dare even to think of any resistance for several decades.”

From the very beginning Castro was committed to physically destroyed the bourgeoise and to create the belief that any armed resistance was useless. The MININT officers were trained by the East German Stassi and the Soviet KGB. Castro was swift in constructing a totalitarian police state.

The MININT officers were thoroughly trained in internal surveillance, recruitment of informers, infiltration of agents in resistance groups, and painful interrogation techniques. Some units where schooled as elite fighting forces.

MININT’s most successful operation was the Ana Belen Montes penetration of the Pentagon’s Defense Intelligence Agency as a senior analyst of Cuban affairs. She spied for over fifteen years, having top-secret and other high-ranking U.S. clearances. She was in charge of writing the Pentagon position paper on Cuba. Obviously, the sensitive document was drafted with input from the MININT in Havana. She was arrested in September 2002, and sentenced to 25 years in prison. During her trial Montes stated her devotion to Cuba’s Communist Revolution.

Loyalty and obedience to Marxist dogma became an obsession with Fidel and Raul Castro. This was the case within the military officers corp. Their top priority duty was the defense of the Communist revolution. Neutrality was not an option. You where either a true believer or a traitor.

In 1982, a MININT defector, Gerardo Peraza, testified in the U.S. Senate, Subcommittee on Security and Terrorism stating: “It is mandatory for the members of the DGI to belong to the party….!

It was essential that MININT officers received an in-depth indoctrination in Marxist-Leninist ideology. They were thoroughly checked on their allegiance to the state security apparatus. They had to be proficient in the arts of vigilance, persuasion, bribery, blackmail, threats and execution of enemies.

The MININT officers sense of duty, pride and full commitment to Communism was an integral standard of their code of conduct, carefully monitored by the organization.

On December 21, 1994, the National Assembly headed by Ricardo Alarcon, approved statutes for National Defense. “Whereas: The program of the Communist Party of Cuba expresses that the defense of the socialist homeland constitutes the essential objective of the party and the most sacred mission of the revolutionary armed forces.” A compelling acceptance of the Communist Party dogmatic ideology.

In addition, with the authority conferred by Law 75 of the Constitution, the National Assembly ordered (Article 2): “The National defense is guided by the Cuban military doctrine, developed and implemented under the control of the Communist Party of Cuba, that is the superior and leading force of society and the states.”

The MININT is the main human rights violator of the Castro regime, aimed at repressing, indoctrinating and controlling the Cuban population. Influencing and infiltrating U.S. groups and institutions, particularly the CIA, State Department, the Department of Defense, the media and universities are some of the main objectives of this apparatus.

by Pedro Roig  J.D. By 1550 Cuba remained a humble, non-profitable military outpost but Spain was living a glorious historical period.  ...