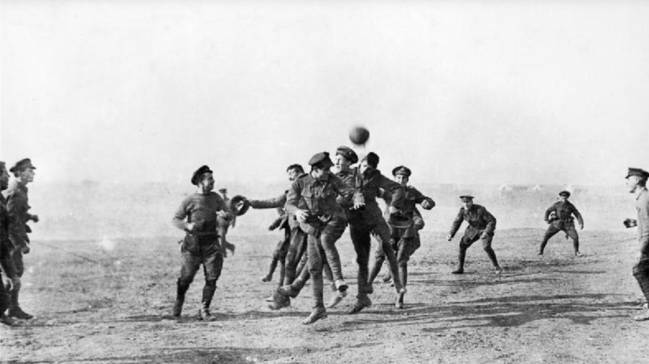 During the First World War, on December 24 and 25, 1914, an unusual and spontaneous event occurred between German and British soldiers who celebrated Christmas Eve and Christmas between the trenches that separated them. This action is known as “The Christmas truce” and it spread to various sectors of the battle front.

At the beginning of the conflict, the German plan was to defeat France in a fast and powerful enveloping advance to Paris. At first the offensive was effective, but errors in the German high command weakened the forces assigned to the decisive attack and gave the French, British and Belgian armies time to prevent, in the “First Battle of the Marne” (6-12 September 1914 ), the victory of Kaiser Wilhelm II.

The dead and wounded of all the armies that fought in that battle of the Marne totaled more than half a million. This was the beginning of the bloodiest war in recorded history until World War II, 25 years later. Thus began the so-called “race to the sea” which for the Germans meant to reach the English Channel and occupy the strategic ports of Belgium and northern France.

The British, French and the remnants of the Belgian army managed to defend these strategic ports in the fierce Battle of Ypres (October 16 – November 22) and in which more than 250,000 Allied and German soldiers fell. The Industrial Revolution had facilitated a massive production of high-impact and volume-fire weapons (for example, the machine gun), which turned the battlefields into suicide attacks.

By December 1914, the horror of massive losses in the open country forced the French, British and German to establish defensive trench lines that stretched from Switzerland to the North Sea. (Indeed more than 800 kms of trenches). This is the historical context in which the “Christmas truce” took place without planning or official permission, between soldiers who the day before were killing each other in violent combats. A truly extraordinary fact.

It all started on the afternoon of Christmas Eve when German soldiers asked the British (English, Scottish and Canadian troops) to allow them to collect their wounded and bury their dead; the British accepted and came out of their trenches for the same purpose.

Lieutenant Geoffrey Heineky, 2nd Westminster Regiment, wrote to his mother: “A very extraordinary thing happened… some Germans came out and raised their hands and started picking up their wounded, so we came out of our trenches and picked up our wounded. The Germans signaled us and many of us went to talk to them and thus we helped each other to bury the dead ”.

The London Daily MIrror publishes the story with photographs of the meeting. In a letter written by Corporal A. Wyatt, he recounted the emotional moment to his parents: “My battalion (Norfolk) was deployed in the trenches on December 24.  Everything was calm. Not a rifle shot. At dusk we hear the Germans singing Christmas carols, especially “Stille Nacht” (Silent Night). The British responded with applause and shouts of joyous celebration by singing Christmas carols.”

Corporal Wyatt continues: “On Christmas Day, it dawned with a dense fog that did not lift until noon. Then we heard from the German trenches shouts “we are not going to shoot” and they began to walk towards our trenches; two or three of our boys came out to greet them. That was how everyone went out to shake hands and exchange Merry Christmas greetings. We shared sweets, chocolate and cigarettes and ended up playing football in no man’s land. “

The German and British high command were dismayed and issued strict orders that any kind of fraternization with the enemy would result in a court martial and be severely sanctioned.

Why soldiers, who hours before, killed each other in fierce combat came to fraternize?

The answer is full of unknowns, because it has different ways of being rationalized. Perhaps it lies within the ancient epic culture of burying their warriors with dignity as they had done the day before; and the cherished memory of Christmas past, illuminating the grace of the Holy Spirit in an instant of peace and human redemption. More than a truce, it was a Christmas miracle.

* Pedro Roig is Executive Director of the Cuban Studies Institute. Roig is an attorney and historian that has written several books, including the Death of a Dream: A History of Cuba. He is a veteran of the Brigade 2506.

At the time of the Cuban Missile Crisis in October 1962, the United States had decisive nuclear superiority over the ...