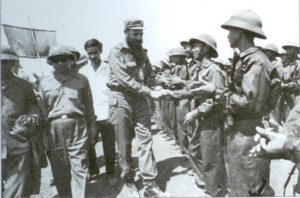 Cuban officials, under diplomatic cover in Hanoi during the Vietnam War, brutally tortured and killed American POW’s whom they beat brutally in a submission program ordered by Fidel Castro and sanctioned by the North Vietnamese. [1] This was dubbed the “Cuban Program” by the Department of Defense and the CIA, and it involved 19 American Prisoners of War.

A Defense Intelligence Agency (DIA) report states that “The objective of the interrogators was to obtain the total submission of the prisoners….” [2]

In April 1999, the story of Castro’s officers torturing American POW’s in Vietnam was published in a research book “Honor Bound” written by Stuart Rochester and Frederick Kiley. [3] It explained that almost daily for one year, the man the POW’s called “Fidel” whipped them with strips cut from rubber tires until their buttocks hung in shreds.

The American POW’s gave their jail the name of “the Zoo” and their Cuban torturers the names “Fidel,” “Chico,” and “Pancho.” The Vietnamese camp commander was given the name “the lump” because of a fatty tumor growth in the middle of his forehead.

In his book “Faith of my Father,” the late Senator John McCain, a pilot, shot down and taken prisoner in North Vietnam wrote: “In the Zoo, mass torture was a routine practice. For a time, the camp personnel at the Zoo included an English-speaking Cuban, called “Fidel,” who delighted in breaking Americans, even when the task required him to torture his victims to death.”

The total submission behavior set by the Castro’s psychopaths included bowing to a Vietnamese guard, smoking cigarettes in front of other prisoners, or making tape-recorded statements to be published by the Communist propaganda media. Since the beginning of the Revolution (January, 1959), Castro had an obsession with the techniques used in torturing prisoners of the heroic underground groups in Cuba’s jails.

The American POW’s level of agony was a living hell. The Castro agents placed the awaiting prisoners in cells next to the torture chamber, so they could hear the screams inflicted on the suffering prisoners.
Upon his return to the U.S. a debriefer quoted one POW as saying: “The anticipation of beatings became more of a threat than the actual beating. Nervous to the point of loosening of bowels when they heard the key in the lock.” [4]

Colonel Earl Cobeil, a Navy F-105 pilot was the worst case recorded by debriefers in the “Cuban Program.”  “The sight of Cobeil walking back from the torture chamber was a horrible experience.  The man could barely walk; he shuffled slowly, painfully.  His clothes were torn to shreds.  He was bleeding everywhere, terribly swollen, dirty, black and purple from head to toe.  The man’s head was down: he made no attempt to look at anyone.  He had been through much more than the daily beatings.  His body was ripped and torn; slivers of bamboo were embedded in the bloodied shins and there were what appeared to be tread marks from the hose across the chest, back and legs.  “Fidel” smashed a fist into the man’s face, driving him against the wall.  Then he was brought to the center of the room and made to bend down on his knees. Screaming in rage, “Fidel” took a rubber hose from a guard and lashed it as hard as he could in the man’s face.  The prisoner did not react. He did not cry out or even blink.  Again and again, a dozen times the Cuban smashed the man’s face with the hose.”[5]

Col Earl Cobeil, a prisoner of war, was beaten in the “Cuba Program” to the point where he was completely catatonic, incapable of responding to any command.  He was listed as having died in Vietnam captivity. [6]

“Fidel” was over six feet tall, in his early 30s, muscular, ramrod-straight, with full command of English, with American slang and personal knowledge of many cities in the Southeastern United States from Miami to the Carolinas. [7] “Fidel” has been identified by some of the POW’s in the “Cuban Program” as Fernando Vecino Alegret.  Fernando Vecino Alegret lived in the United States for extensive periods of time, including Miami, and studied at the University of Alabama, until he joined the Castro’s guerrillas in 1958. Today, at 82-year-old, he is a retired brigadier general of the Cuban FAR, and veteran of Castro’s guerrillas.

The agonizing tortures inflicted by Cuban officers in Vietnam against American POWs’ is another criminal chapter in Fidel Castro’s obsessive hate of the United States.