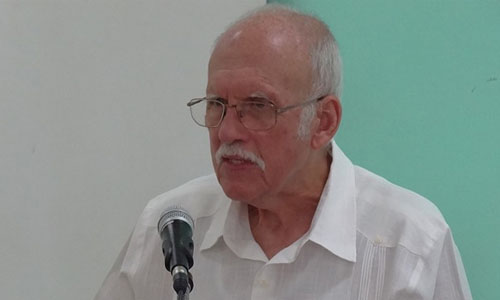 NO LIMITS TO CRUELTY!

During the Vietnam war Fidel Castro visit Hanoi in 1973, to show his public support to the communist regime fighting the United States but for years cuban military officers were providing secrets operations in that war. The most repulsive was the torturing of American POW’s.

In April 1999, the story of Castro’s officers torturing American POWs in Vietnam was vividly recaptured In Honor Bound: The History of American Prisoners of War in Southeast Asia, 1961-1973.  The immensely detailed 592-page study was prepared by Stuart I. Rochester, deputy historian of the Office of the Secretary of Defense, and Frederick Kiley, a former Air Force Academy professor and noted POW historian.  Drawing from memoirs, interviews, classified documents, and other sources, the historians provided the most sweeping view of American POWs since the return of the prisoners in 1973.

On November 4, 1999, Ileana Ros-Lehtinen, then Chairman of the House Subcommittee on International Economy and Trade led a Congressional Hearing where several POW officers described the brutal tortures inflicted upon them by Castro’s agents in Vietnam.[2]

The total submission behavior set by the Castro’s psychopaths included bowing to a Vietnamese guard, smoking cigarettes in front of other prisoners, or making tape recorded statements to be published by the Communist propaganda media.

In his book “Faith of my Father,” the late senator John McCain, a pilot, shot down and taken prisoners in North Vietnam, wrote: “In the Zoo, mass torture was a routine practice.  For a time, the camp personnel at the Zoo included an English-speaking Cuban, called “Fidel” who delighted in breaking Americans, even when the task required him to torture his victims to death.”[3]

On September 9, 1999, the Miami Herald offered the testimony of Air Force Colonel (R) Ed Hubbard a POW in Vietnam that identified the leader of the Cuban interrogation team that tortured him: “That’s the guy,” Hubbard said, visibly shaken, as he held a picture of Cuban General Fernando Vecino Alegret.  A military specialist in anti-aircraft defenses in the 1960s, Vecino Alaegret is known to have visited North Vietnam around 1967.[4]

“Fidel” was described by several POWs as been over six feet tall, young, muscular, with full command of English with American slangs and personal knowledge of many cities in the Southeastern United States from Miami to the Carolinas.[5]  “Fidel has been identified by some of the POWs in the “Cuban Program” as Fernando Vecino Alegret.  Fernando Vecino Alegret lived in the United States for extensive periods of time, including Miami, and studied at the University of Alabama, until he joined the Castro’s guerrillas in 1958.  Today he is a retired brigadier general of the Cuban FAR.

Colonel Earl Cobeil, a Navy F-105 Pilot was the worst case recorded by debriefers in the “Cuban Program.”  “The sight of Cobeil walking back from the torture chamber was a horrible experience.  The man could barely walk; he shuffled slowly, painfully.  His clothes were torn to shreds.  He was bleeding everywhere, terribly swollen, dirty, black, and purple from head to toes.  The man’s head was down, he made no attempt to look at anyone.  He had been through much more than the daily beatings.  His body was ripped and torn; silvers of bamboo were embedded in the bloodied shins and there were what appeared to be tread marks from hose across the chest, back and legs.”  He reportedly died of these injuries on or about November 5, 1970.  His remains were identified and returned to the United States on March 6, 1974.

For his extraordinary courage and fortitude in the face of savage torturing, Coronel Earl Glenn Cobeil received the President Air Force Cross Award (posthumously) for Extraordinary Heroism in Captivity.  He is buried at the Arlington National Cemetery.

Fernando Vecino, Human Rights violations began at San Juan Hills (The historical site of the Hispanic-Cuban-American war) were in January 11, 1959 sitting in a WW2 jeep he directed the execution of 71 soldiers, massacred without a due process trial. [6]

The factual story of the excruciating pain inflicted by Cuban officers in Vietnam against American POW’s is a gruesome testimony of the terrible punishment suffer by Cuban political prisoners in Castro’s chambers of torture. Throughout over 60 years of dogmatic intolerance thousands of Cuban freedom’s fighters faced this criminal system where there are no limits to cruelty.

*Pedro Roig is Executive Director of the Cuban Studies Institute. Roig is an attorney and historian that has written several books, including the Death of a Dream: A History of Cuba. He is a veteran of the Brigade 2506.

by Pedro Roig, J.D. Part I China's internet censorship is the most comprehensive and aggressive in the world. The trained ...

Is Raul Castro leaving power? This is the topic of a deceiving question in a major Miami newspaper, based on ...