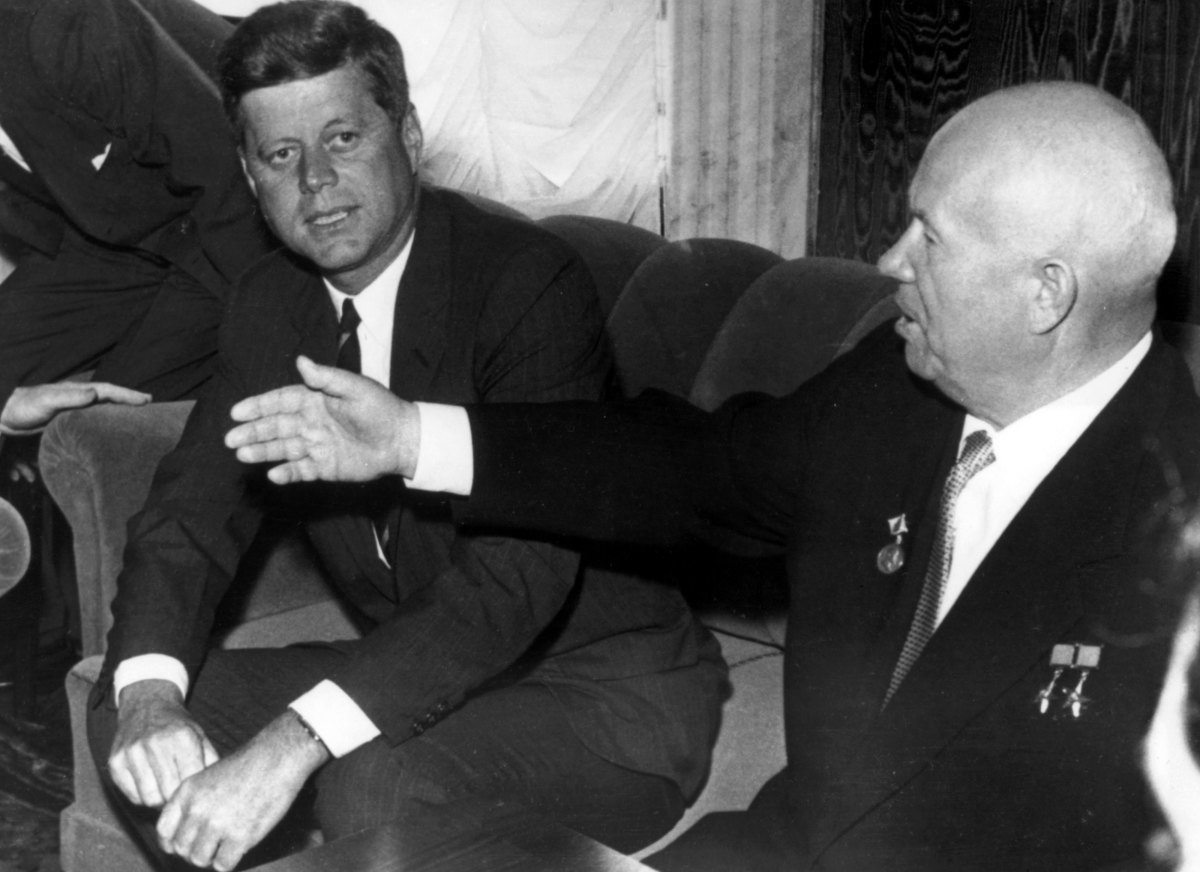 The defeat of the heroic Cuban Brigade at The Bay of Pigs was a monumental failure for the John Kennedy Administration, especially in the context of the Cold War confrontation. In Moscow, Nikita Khrushchev saw in the Bay of Pigs disaster a confused superpower, led by a weak and indecisive president who could cave in under pressure. Anatoly Dobrynin, the Soviet Ambassador to the United States, believed Khrushchev’s perception of Kennedy was shaped by the lack of resolve shown by the President during those crucial days in Cuba. The Soviet Ambassador, regarding Khrushchev’s view of Kennedy, wrote: «That after the failure of the American backed invasion of Cuba by exile forces, the American president would yield to his pressure.” *(Anatoly Dobrynin,” In Confidence”. New York: Random House,1995, p. 44.)

On July 3-4, 1961, the leaders of the two superpowers met in Vienna. At the summit, according to Ambassador Dobrynin, Khrushchev displayed “an aggressive almost threatening tone…” (Dobrynin, op.cit,pag 45).  Kennedy said afterwards to the journalist James Reston: “I think [ Khrushchev in Vienna] did it because of the Bay of Pigs. I think he thought anyone who was so young and inexperienced as to get in that mess could be taken, and anyone that got into it and didn’t see it through had no guts. So, he just beat the hell out of me”. (Christopher Andrew, “For the President’s Eyes Only: Secret Intelligence and the American Presidency from Washington to Bush (London HarperCollins,1995)

Kennedy was shocked by Khrushchev’s behavior. For Professor Graham T. Allison: “Kennedy had worried both after the Bay of Pigs and after the Vienna meeting with Khrushchev, that the Chairman might have misjudged his mettle”. *(Graham T Allison,”Essence of Decision”. Harvard University, Boston, 1971 p.194).

From then on, he believed that the threats were serious and a military confrontation with Russia was possible, but the Kremlin’s leadership was not seeking a war with the U.S. they knew they could not win. Khrushchev was counting on Kennedy’s indecisiveness under pressure as shown during the Bay of Pigs crisis. The Soviet leader was simply “bluffing” (Ibid), the most dangerous game which brought the world to the brink of a nuclear catastrophe.

In Washington, Robert Kennedy was acutely aware of the dangerous consequences to the U.S.-Soviet relations, inherited from the Bay of Pigs disaster. On April 19, as the Brigade fought their last desperate hours, in San Blas, Playa Larga and Giron, Robert Kennedy sent a memo to his brother, warning that: “if we don’t want Russia to set missile bases in Cuba, we better decide now what we are willing to do to stop it… the time has come for a showdown, for in a year or two years the situation will be vastly worse.” *(Arthur Schlesinger,” Memorandum from the President’s Special Assistant to President Kennedy” 2-11-61). Robert Kennedy, Secretary of Justice, understood the dangers posed by a Soviet miscalculation of their strategic options and saw the threat of the deployment of nuclear missiles in Castro’s Cuba – remarkable foresight.

On December 1, 1962, barely seven months after the defeat of the invasion, Castro announced to the World the defining ideology of his revolution. Glowing in his victory over John Kennedy the Cuban dictator stated: “I am a Marxist-Leninist and shall remain a Marxist-Leninist until the day I die.” ( Revolución, December 2, 1962).    Castro himself made it official. Cuba was a communist state. Marx was the ideological inspiration and Lenin the messenger of a brutal repression.

With his statement “I am a Marxist”, Castro confirmed Washington’s fears that the Island, ninety miles from the U.S. shores, was moving into the Soviet military orbit and that the deployment of nuclear missiles could be in the Kremlin’s secret agenda. The Kennedy Administration was facing a larger strategic threat than the one which had led to the Bay of Pigs. The Soviets Military were in Cuba.  It was a real and present danger to National Security.

In February 1962, the Joint Chiefs of Staff established a priority plan for completion of military options, including a massive air offensive and amphibious landings in the island.    Robert Kennedy was involved in the operational planning. Cubans were to be at the forefront in the covert missions, (including Rolando Cubelas’ attempts to assassinate the communist dictator). President Kennedy was briefed on the projected guidelines.

There was a sense of urgency from the White House to get rid of Castro’s communist regime. “We cannot overemphasize the extent to which responsible Agency officers felt themselves subject to the Kennedy administration’s severe pressure to do something about Castro and his regime.” * (1967 CIA Inspector General’s Report, by Jack Earman.) On January 19, 1962 at a meeting in Robert Kennedy’s office, the President’s brother forcefully stated:” no time, money, effort or manpower is to be spared” and that the President had told him the day before: “the final chapter had not been written, it has to be done and will be done”. (Document G. Guidelines of operation Mongoose,03-14-62).  The Bay of Pigs disaster signaled the moment when Fidel Castro ceased to be an enemy inherited from General Eisenhower presidency and became the enemy of the Kenethy brothers.

From 1962 to 1965 Ted Shackley, a highly respected CIA officer, became the chief of Miami’s Cuban clandestine operations. Under his leadership it expanded into the U.S. largest intelligence undertaking in the World. (Second only to Langley, Virginia) “It included six hundred case offices and over three thousand contract agents”. *[Howard Hunt. “Give Us this Day” (Arlington House, 1972) pag 195]

In his autobiography, Richard Bissell, CIA Deputy Director for planning added his perspective, writing. “To understand the Kennedy administration’s obsession with Cuba, it is important to understand the Kennedys, especially Robert. From their perspective, Castro won the first round at the Bay of Pigs . . . He had defeated the Kennedy team; they were bitter and could not tolerate his getting away with it. The president and his brother were ready to avenge their personal embarrassment by overthrowing their enemy at any cost.”(Richard Bissel, “Reflections of a Cold Warrior”,New Heavens: Yale University Press, 1996, p 201)

From the very beginning, Fidel Castro had been receiving Soviet military advisors. In July 1959, Fidel Castro’s intelligence chief, Comandante Ramiro Valdez was sent by Castro to Mexico City, to meet the KGB Station officers. It was a successful meeting. The Soviets agreed to secretely send over 100 intelligence experts to forge a disciplined and higly efficient repressive force.(Timothy Ashby, The Bear in the Backyard: Moscow CaribbeanStrategy. Lexington,Mass. 1987 pp 22-6). On January 4, 1960, Aleksander Alexseev, a veteran KGB agent operating as a journalist of the communist newspaper Tass, met with Fidel Castro, his brother Raul, “Che” Guevara and Nunez Jimenez. According to the declassified KGB documents, Fidel Castro insisted that only those present were to know, at that time, that the ideological model of the Cuban revolution was communism. (Aleksander Alekseev, KGB, January 4, 1960. Folio 3, Tomo 5, Lista 65 Archive SVR, KGB.)  The reign of terror was dawning.

During the New Year’s Day parade in 1962, Cuba provided U.S. intelligence with the first reliable information on the extent of Soviet defense arms deliveries to Cuba. U.S. intelligence estimates by the planes on display that the aircraft in the possession of the Cuban Revolutionary Air Force includes around sixty Soviet jet fighters, primarily MiG-15 and MiG-17 aircraft with a small number of MiG-19 planes.

The centerpiece of the procession presided by Fidel Castro and his entourage, was an oversized casket bearing an effigy of President Kennedy with the words “MR. KENNEDY LIES HERE. THE CUBAN REVOLUTION KILLED HIM”  painted in bold white letters in English. (Bohemia Magazine, January 2,1962).  Yes, the Kennedy’s and Fidel Castro were in a fight to death!