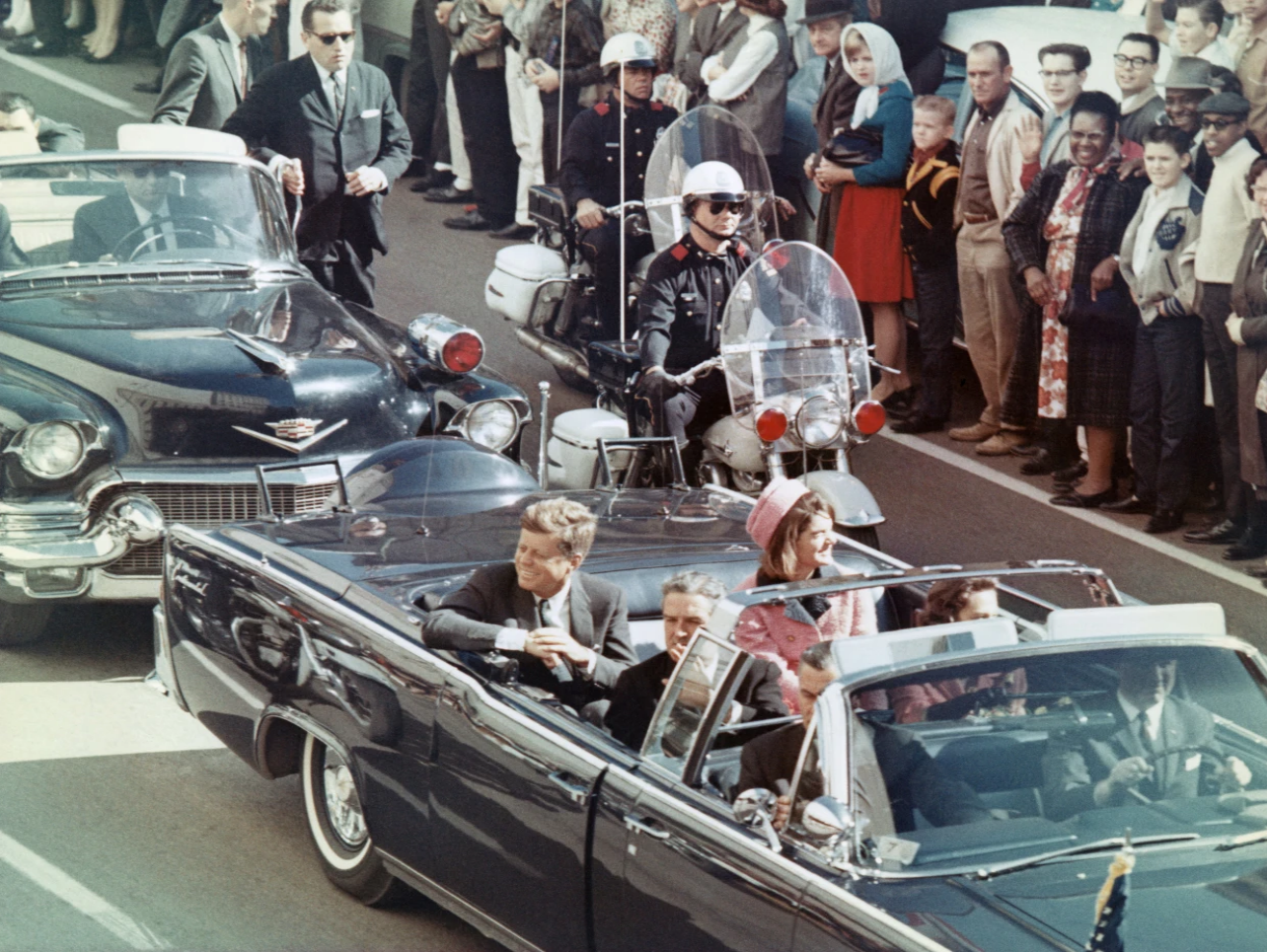 PRESIDENT LYNDON JOHNSON AND THE COVER UP

Fifty-nine years ago on November 22, 1963 John F. Kennedy was assassinated in Dallas, Texas. The President was shot twice and slumped over toward First Lady Jackie Kennedy who was sitting by his side in a convertible limousine.. At 1:00 pm Central Standard Time, the President was pronounced dead.

At 1:51 pm Lee Harvey Oswald was arrested at the Texas Theater. In the police station Oswald was interrogated by several detectives. He was sitting at a table  in a delucional state of satisfaction  until he was asked; “Have you ever been to Mexico? “Yes, I’ve been to Tijuana when I was in the Marine Corps”. Then the next question deeply  disturbed Oswald “Have you  been to Mexico City?”.  He was surprised and asked the interrogator.” “How did you know? I-I-I’ve never been there.” [Interview with Jim Hosty, June 22,1993 (Frontline)].

The CIA knew that on September 27,1963 Oswald had arrived in Mexico City and registered in the Hotel del Comercio. He  visited the Cuban and Soviet consulates several times in an attempt to secure a visa to Russia via Cuba. Oswald visa requests were denied. At the Cuban consulate Oswald turned violent and began screaming “I am going to kill that bastard! I am going to kill  Kennedy”. (Gus Russo and Stephen Molton. “Brothers  in Arms”.Bloomsbury, New York, 2008, pp 310).   Was the visa denial a calculated disclaimer to distance Oswald from Castro’s Cuba?  The Soviet and Cuban intelligence agencies knew that the CIA had active agents, camaras and sophisticated listening devices on both diplomatic buildings.

In his unpublished autobiography Winston Scott, the CIA’s Mexico City Station Chief (1956-1969) wrote: “ Every piece of information concerning Oswald was reported immediately (to Washington) after it was received…. These were made in all his contacts with both the Cuban consulate and the Soviets….Persons watching these embassies photographed Oswald as he entered and left; and clock the time he spent on each visit. (HSCA. House Selected Committee on Assassination.Mexico City Report p125 Winston Scott “Foul Foe”. Unpublished Manuscript, p 273.) Winston ”Winn” Scott was a WWII veteran intelligence officer with excellent operational performance based on training, experience, and good judgement focused on expedient priorities.

On the issue of Kennedy’s assassination, the CIA Director John McCone believed that there was definitely “a Castro connection. (Leo Janos Testimony to the Church Committee, CCIR.October 14,1975. Senate Committee on Intelligence,Box 337). By this time, the spectre of another Cold War confrontation with Russia over Cuba was entering the minds of those aware of Castro’s Ministry of Interior (MININT) agent’s complicity with Lee Harvey Oswald which could provoke a demand from an outraged U.S. nation for the elimination of Cuba’s communist dictator.

In Washington, CIA Director McCone arrived at the home of recently sworn-in President Lyndon Johnson, to brief him on the details of President Kennedy’s assassination and other relevant issues on national security.  Johnson had been Kennedy’s principal  advocate of legislation in Congress and led  Kennedy’s administration in the U.S. Aerospace Program, but Johnson was not aware of  other relevant matters, especially John and Robert Kennedy’s plot to kill Castro.  McCone informed Johnson that precisely that day, a high ranking CIA’s agent was meeting in Paris with “comandante” Rolando Cubelas Secades, a member of Castro’s inner circle, in another attempt to eliminate Castro. (Brian Latell,”Castro’s Secrets,” eBook,MacMillanCorporate. First published in hardcover in 2012 by Palgrave MacMillanin the U.S. p 45).

Jonhson, a corpulent bully, alert and master of his political ambitions, immediately called his trusted friend and powerful Democrat Senator Richard Russell and asked his advice on how to deal with Cuba’s connection with Lee Harvey Oswald. His response was given in four words: “Don’t let it out”.(Russo and Molton, op-cit, pp 367). From that moment, disinformation on Castro’s connection to JFK’s crime became the gospel of President  Johnson’s cover up.

PRESIDENT JOHNSON AND THE COVER UP OF CUBA’S CONNECTION

Lyndon Johnson was a brilliant, aggressive and deceiving individual with an insatiable craving for political power, smoking, drinks, women and great food.  He was loved and admired as well as feared and despised by those around him. He had a compulsion to achieve a major role in history, but could not overcome the devastating feeling of being a shadow of JFK and Jackie’s Camelot. Never before, or after, has the White House experienced the public perception of an elegant, aristocratic and beautiful leadership like the one during the Kennedy years.

In Mexico City where Oswald, a self-proclaimed Marxist, spent six days in contact with Cuban and Russian intelligence agents, the destruction of incriminating evidence began within hours of JFK’s assassination. The evidence simply disappeared from Mexico’s secret files of Winn Scott, CIA Station Chief and Ambassador Thomas Mann.  President Johnson did not hesitate to order the destruction of all possible connections of Cuba’s agents with Lee Harvey Oswald, including the several visits of the assassin to the Cuban and Russian consular offices in Mexico City. President  Johnson feared that the mounting connection of the Cuban and Russian agents with Oswald while in Mexico City could lead the U.S. to a major confrontation with the Soviet Union.

In the tragic day of JFK’s murder (November 22 1963), the CIA recorded a 2:00 pm telephone conversation between Luisa Calderon, a Cuban agent that met on several occasion with Oswald in the consulate, cheerful talking with a colleague: “Luisa, Kennedy has been killed,  assassinated in Texas”,  “Really when?” “At one o’clock”. “Fantastic! Wonderful.” Luisa laughed, and the caller said, “Apparently his wife and brother were also wounded”. Their laughter overwhelms them for a moment and Luisa comments, “What good news!” she then asked for the consequences, “only good ones,” Luisa could bearly control her emotions. “He was a family man, yes, but also a degenerate aggressor, three shots in the face,  perfect.” (CIA intercept transcript, November 22,1963).

Immediately Luisa dials a number on her phone. An embassy colleague named Nico picks up. They too have a laugh at Kennedy’s expense, and then Nico asks Luisa Calderon “Okay. What time will the plane arrive? -At four, and four-thirty they must be at the airport.” she answers [Russo and Molton op cit p 353 ]. The arriving plane mentioned in the Calderon transcript was Fabian Escalante, returning from Dallas to Cuba via Mexico City. (Notes of conversation between Marty Underwood and CIA’s Win Scott,Mexico City, Mexico, March 1968, p.3 paragraph 3). Fabian Escalante is a Major General in Cuba’s Ministry of the Interior,(MININT).

Do Not Implicate Cuba

What happened to the CIA files about Oswald’s visits to the Cuban Consulate in Mexico City? Why was it marginally mentioned in the Warren Commission Assassination Report? Thomas Mann has the answer. The U.S. Ambassador to Mexico (April 18, 1961–December 22, 1963) stated to the House investigating officers, that he was ordered a few days after Oswald murdered President Kennedy to eliminate any investigation that would implicate Cuba’s involvement in the assassination.

It is a historical fact that Oswald was in Mexico City for several days to obtain a visa to Russia via Cuba and also met socially with diplomatic agents, specifically with the 25 years old Marxist Secretary of the Cuban consul, Silvia Duran. (Russo-Molton,op cit p 279).  Ambassador Mann believed that a plot to kill President Kennedy had been hatched on Mexican soil, but President Jonhson, driven by his fear of a second Cuban Crisis with the Soviet Union ordered John McCone and Dean Rusk, a pathetic parody of Britain Prime Minister Naville Chamberlain, to shut down the CIA and U.S. Embassy’s ongoing investigations that could have implicated Castro’s agents that dealt with Oswald in Mexico City.

Actually, President Johnson sent Laurence Keenan to Mexico City to shut down evidence of Cuba’s connection with Lee Harvey Oswald. Ambassador Thomas Mann writes: ”I received this instruction to drop the investigation…It was the only time in my career that I was ever told to stop investigating.”(Russo and Molton,op cit p 380 )

In Mexico City where Oswald, a self-proclaimed Marxist, spent six days in contact with Cuban and Russian intelligence agents, the destruction of incriminating evidence began within hours of JFK’s assassination. The evidence simply disappeared from Mexico’s secret files of Winn Scott, CIA Station Chief and Ambassador Thomas Mann.  President Johnson did not hesitate to order the destruction of most of the possible connections of Cuba’s agents with Lee Harvey Oswald, including the several visits of the assassin to the Cuban and Russian consular offices in Mexico City. President  Johnson feared that the mounting connection of the Cuban and Russian agents with Oswald while in Mexico City could lead the U.S. to a major confrontation with the Soviet Union.

With the largest operational personnel and state-of-the-art listening equipment in Latin America, the extraordinary capability of the CIA station in Mexico City was designed to know everything about the Cuban and Soviet Embassies. Its operation ensured that every phone line was tapped, and every visitor photographed. Precisely that level of spying sophistication could have disrupted President Johnson’s urgency to cover up the Cuban connection. Therefore, CIA’s Winn Scott and Ambassador Thomas Mann’s ongoing  investigations on Oswald’s six days of activities in Mexico City were ordered to be cancelled.